On September 20, 2021, the five Ontario University Programs wrote an open letter to the Council Members of the College of Physiotherapists of Ontario.

Get up to Speed

Most of our Embodia community blog readers know of the events that took place surrounding the cancellation of the Physiotherapy Competency Exam (PCE) Clinical Component during COVID and have been following closely.

In case you are not up to date or are in need of a refresher, here is a timeline from our previous blog on the subject, Let's Be Fair and Proactive: Ontario Fairness Commissioner Addresses the Situation of Physiotherapy Graduates and Entry to Practice Review. 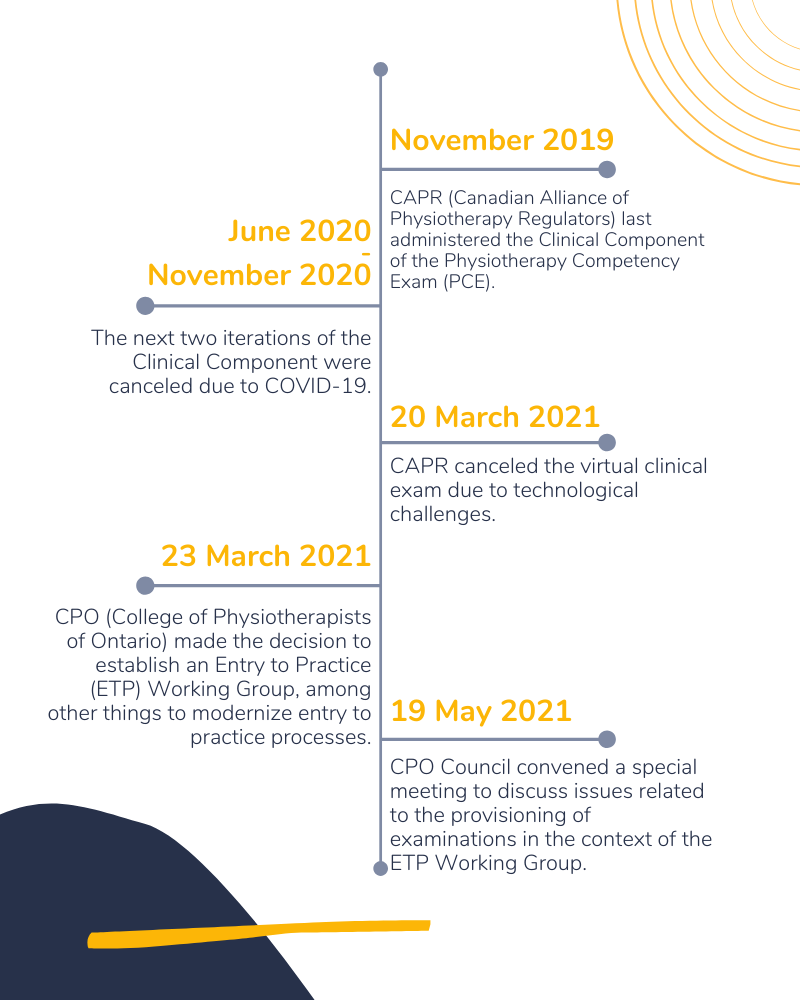 You can also delve further back in time and take a look at our two previous blogs on the subject:

Furthermore, Canada is the only country out of 17 that requires an external clinical competency examination for licensure from domestic physical therapy graduates of an accredited program.

The review suggests that licensure OSCEs for national professional programs have not been justified by formal research studies of international practice standards.

From a policy perspective, this means that such exams for national graduates could be discontinued.

For study limitations, please refer to the complete paper.

One Day After This Paper Was Published, CAPR Had Something a Little Different to Say

On 4 August 2021 CAPR published a Clinical Component Update stating that they are on schedule for the 8 September 2021 exam launch.

This update also expressed that:

In their 4 August 2021 update, CAPR stated that they have been receiving emails from many individuals prompted by the urging of a third party.

Bahram's voice was being heard and listened to.

His was not the only voice of course, but a strong one without a doubt.

Due to the stir that he was making, he received a letter from the College of Physiotherapists of Ontario regarding his views on the Physiotherapy Competency Exam (PCE).

The letter demanded that he provide a public apology for his comments and opinions lest be investigated by the College.

Faced with the frightening situation and concerned for his professional standing and livelihood, Bahram still chose to follow the path of ethics and allyship.

What would you have done if you were in his shoes?

Anonymous Survey for the People

To get a better understanding of the situation, Bahram created an anonymous survey.

He wanted to see if he was alone in his beliefs and sentiments, or if other physios also feared speaking up.

Since then, the survey has been filled out by 1500+ Canadian physiotherapists and boasts over 4000 unique comments, the majority of which express very similar (and often stronger) opinions.

Below are the survey results from the 1500+ respondents. 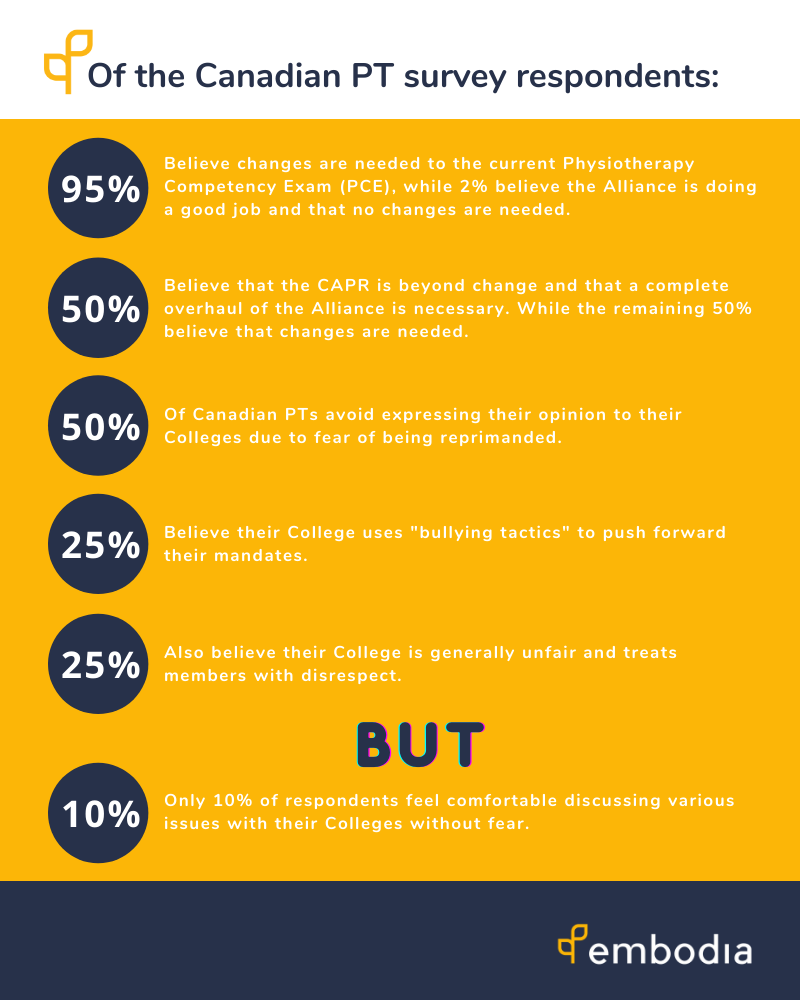 A Call To Action

Since the publication of the Bobos et al., 2021 paper mentioned above, Bahram has continued his advocacy.

He has written a letter that he plans on sending to CAPR and the Canadian Physiotherapy Colleges.

The letter cites 10 facts regarding the validity of the PCE, OSCEs and clinical examinations for Canadian trained healthcare professionals. 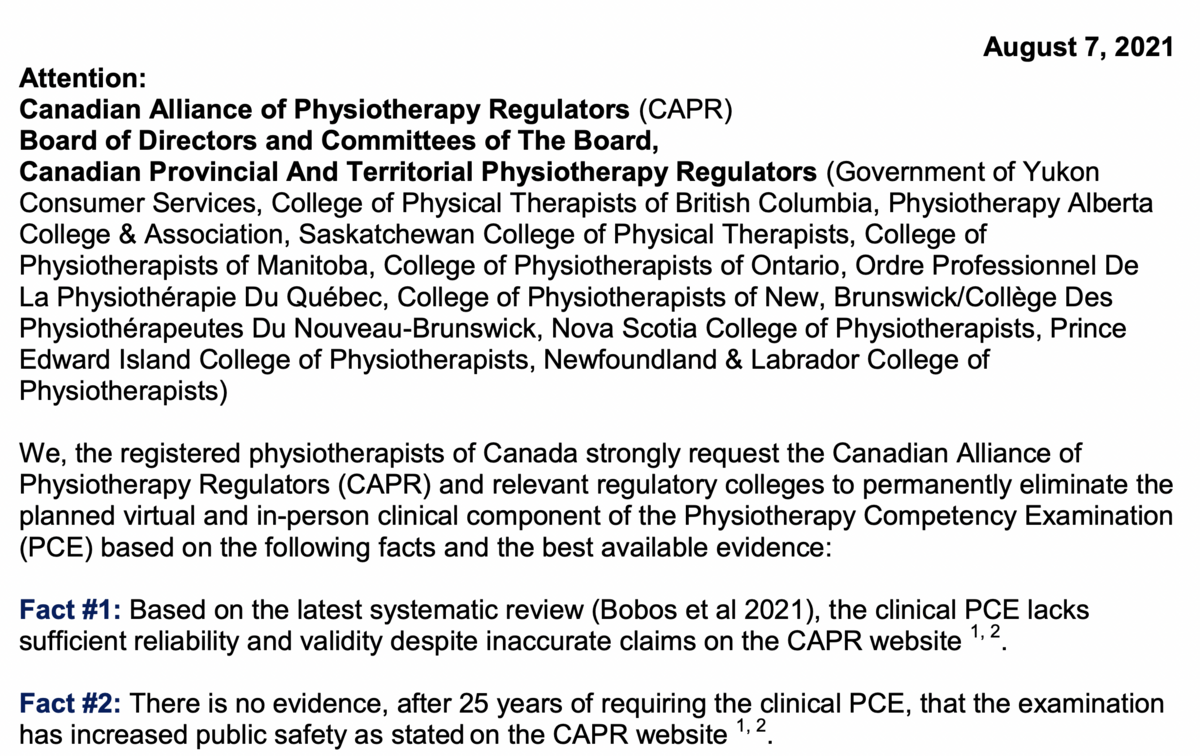 If after reviewing the letter you agree and would like to show your support, please email the following information to jam@aptei.com:

Our community is stronger together.

There is no us (licensed physiotherapists and other healthcare professionals) and them (physiotherapy grads unable to get licensed).

In crucial times such as these, we must stand together as physiotherapists, healthcare professionals and ethical humans in support of those in our community dealing with mistreatment and hardship.

We know that you are busy with your practices, lives, and families and might already be feeling overwhelmed.

So we are not asking you to jump headfirst into full-fledged activism, but there is always something to be done - it does not have to be a grandiose gesture.

If we want our profession to survive and thrive, remaining silent and doing nothing is no longer a viable option.

CAPR Stepping It Up

An update on CAPR: The Alliance has a new president, Denis Pelletier.

Denis has met with Embodia Co-Founder, Maggie Bergeron and Darryl Yardley, PT and founder of Mentorship Bootcamp, who has been active in leading the discussions surrounding the PCE cancellations.

This meeting was very productive and collaborative and Denis has maintained regular, open communication with Maggie and Darryl since.

In addition, CAPR has been providing weekly Clinical Component Updates in an effort for greater transparency.

Let us continue standing united as a progressive community.

The way forward is together!